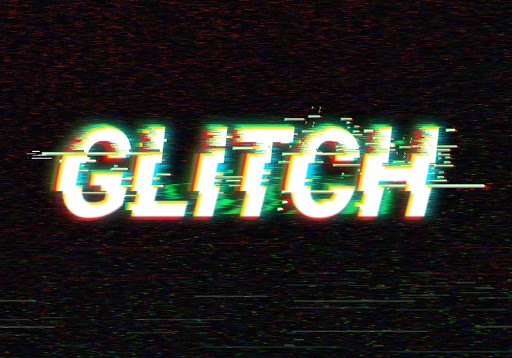 The most common term used by designers for this style is “glitch,” but it is also referred to as VHS effect, RGB shift with scan lines, misprint or visual interference.

Perhaps you’re familiar with the Japanese phrase, wabi-sabi, which translates loosely to the notion of a world view centered on the acceptance of transience and imperfection. It’s often described as finding beauty within the imperfections of life. Well, Misprint, Glitch, Visual Interference Effects is all about imperfection.

It is a reaction to the overly photoshopped and airbrushed images found in posters, adverts, magazine covers, TV promos, and more. The oversaturation of unattainable perfection resulted in a desire for real, organic, and imperfect images. In particular, it is inspired by the world of Instagram and the notion of curating an idealized version of our lives. These false and carefully curated photo representations are being countered by portraying people in a way that audiences feel a stronger and more authentic connection. In our image-obsessed, and overly filtered selfie culture, we crave the gritty, un-retouched reality.

This a double-taker. It catches the eye in a sea of “perfect images” because it’s all about imperfection. It’s based on the unexpected result of digital errors known as “glitches.” Everything around us — advertising, posters, magazine covers, and TV promos — has been Photoshopped to perfection, (some would even call it “fakery” or “visual pollution”), thereby driving a desire to see more real, organic, less-than-perfect images.

Often more appealing to younger generations, this design trend is a subversive, counterculture, “anti-fake” movement intended to make designs stand out. As mentioned above, it may not be appropriate for some situations or brands, so designers are advised to tread carefully if choosing to implement this effect.

Most designers would use the term “glitch,” but sometimes it’s called a VHS effect, RGB shift with scan lines, misprint or visual interference. Innovative designers sometimes combine several types of these vogueish effects into something new.